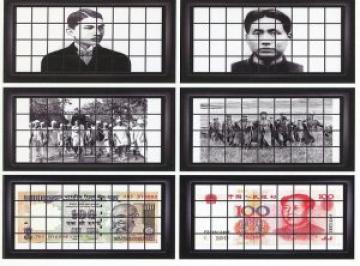 The anchor for this presentation which stems from a joint research project with the historian of India, Sumathi Ramaswamy, is Gigi Scaria’s six-minute video installation No Parallel (2010). This art work audaciously juxtaposes a series of photographic images of Mohandas Karamchand Gandhi and Mao Zedong. Scaria is not the first Indian artist to place the Mahatma and the Chairman within the same frame: India’s most famous modernist M. F. Husain had already done so in 1992 in a large acrylic titled Portrait of the 20th Century. In 2010, British-Indian pop artist Ketna Patel began creating her 'Asian Grandfathers' series in which she brings together the two iconic 'Asian' men, as well. What distinguishes Scaria’s work, however, is the mobilization of a large archive of photographs, setting in motion several pairs of 'parallel' narratives for these fatherly figures. What is the work done by the photograph as it is reused thus by a contemporary artist, and why does he resort to the photograph to do this work? These questions are important to ask given photography’s much acclaimed 'indexical,' 'evidentiary,' and 'truth-telling' capacity. Indeed, the photograph has been taken as a metaphor for the 'documentary.' Yet, Scaria’s work, by using parallel views of Gandhi and Mao, plays with this metaphor on several levels and thus opens up new possibilities for thinking them together.  In looking beyond Scaria’s work, reading it 'in parallel' with other image archives and art works of Mao by Chinese and Indian artists, I ask what it means to recall and restage the iconic figure of Mao with the aid of the repurposed photograph—presented in parallel with that of Gandhi. How are 'familiar' narratives thus disrupted, disintegrated, and at the same time re-assembled and re-considered, and for whose benefit?

Professor Barbara Mittler holds a Chair in Chinese Studies at the Institute of Chinese Studies, Heidelberg University and is Director of the Heidelberg Centre for Transcultural Studies (formerly Cluster of Excellence ‘Asia and Europe in a Global Context’).  She began her studies of Sinology at the University of Oxford (MA Oxon 1990), and has spent research periods in Taiwan, the People’s Republic of China, Hong Kong and at Harvard and Stanford Universities. Her PhD (1994) and her habilitation (post-doctoral thesis, 1998) are both from Heidelberg. In 2000, she received the Heinz-Maier-Leibnitz-Prize for young and outstanding scholars by the German Research Foundation and the German Ministry of Culture. Between 2002 and 2004, she was a recipient of a Heisenberg Fellowship awarded by the German Research Foundation. In 2008, she was elected member of the National Academy of Sciences LEOPOLDINA and, more recently, in 2013, the Heidelberg Academy of Sciences. In 2009, she won the Henry Allen Moe Prize in the Humanities, American Philosophical Society, and most recently, in 2013, her book-length study of the Chinese Cultural Revolution has won the Fairbank Prize by the American Historical Association. Her research focuses on cultural production in (greater) China covering a wide range of topics from music to visual and historical print media in China’s long modernity. She has published numerous research papers and three book-length studies: Dangerous Tunes: The Politics of Chinese Music in Hong Kong, Taiwan and the People's Republic of China since 1949 (Harrassowitz 1997); A Newspaper for China? Power, Identity and Change in China’s News-Media, 1872-1912 (Harvard University Press, 2004); and A Continuous Revolution: Making Sense of Cultural Revolution Culture (Harvard University Press, 2012).