The Other Great Game: The Opening of Korea and the Birth of Modern East Asia, 1876-1905 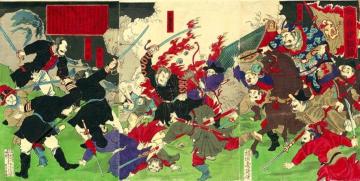 This talk briefly chronicles the 'Other' Great Game in East Asia that took place at the close of the nineteenth century when China, Japan and Russia fought over the impoverished but strategically important Korean peninsula. A late comer to the imperialist age, Korea had stubbornly and successfully fought off all efforts by foreign powers to penetrate her borders. When she was finally pried opened by Japan in 1876, the rapidly developing connections and competition for control over the peninsula transformed East Asia. Korea became an enduring international security conundrum and the regional instability that ensued not only fractured the previous international harmony within the Confucian world, but provided Western countries with both the incentive and opportunity to intervene more vigorously in East Asian affairs. From this globalization of politics, the modern East Asian order was born, with results that affect international relations in the region to this day.

Sheila Miyoshi Jager is a Professor of East Asian Studies at Oberlin College. She was also a visiting Research Professor at the Strategic Studies Institute of the U.S. Army War College in 2006-8. Her first book, Narratives of Nation Building in Korea: A Genealogy of Patriotism (M.E. Sharpe, 2003), focused on Korean nationalism and how particular gendered tropes have had a persistent and pervasive life in the fashioning of Korean modernity. Her second book, an edited volume (with Rana Mitter) entitled Ruptured Histories: War, Memory and the Post-Cold War in Asia (Harvard University Press, 2007), explored how the major East Asian states underwent a profound reassessment of their experiences from World War II to Vietnam following the collapse of the Soviet Union and the end of the Cold War in the early 1990s. Her third book, Brothers At War: The Unending Conflict in Korea (W.W. Norton/Profile Books, 2013), was a military, political and cultural history of the war, seen as spanning from 1945 to the present, and its global impact told from the American, North and South Korean, Soviet/Russian, and Chinese perspectives. It was selected for the 2013 National Book Festival and as one of Foreign Affairs 2013 best book on Asia-Pacific. She is currently working on a new book about the Great Power struggle over the Korean peninsula at the end of the 19th and early 20th century entitled The ‘Other’ Great Game: The Opening of Korea and The Birth of Modern East Asia.