Dying for an iPhone

Dying for an iPhone - Jenny Chan 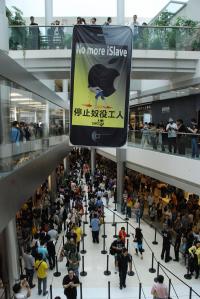 The spate of suicides during 2010 by young Foxconn workers aged between 17 and 25 threw a spotlight on the appalling working conditions endured by those creating the material devices on which the digital society depends. Jenny Chan and her colleagues investigated the lives of rural migrant workers and teenaged student interns at Taiwanese-owned Foxconn, the world’s largest maker of iPhones for Apple and other high profile buyers. Based on multi-year fieldwork in Guangdong and Sichuan provinces, Jenny Chan’s book, Dying for an iPhone, will be published by Rowman & Littlefield (with Ngai PUN and Mark SELDEN).

The “Dying for an iPhone” project assessed the conditions of a new generation of Chinese workers on the basis of the intertwined policies and practices of Foxconn, international brands, and the local government, as well as the collective actions workers,  deploy to defend their rights and interests. Within the tight delivery deadlines, some Foxconn workers leveraged their power to disrupt production to demand higher pay and better conditions. While all of these labour struggles were short-lived and limited in scope to a single factory, protestors exposed the injustice of “iSlavery,” garnering wide media attention and civil society support.

Jenny CHAN (BSSc CUHK, MPhil HKU, PhD London) teaches sociology and China studies in the Oxford School of Global and Area Studies (OSGA) at the University of Oxford. Recently she has received the Reid Research Scholarship (2009-2012), the Great Britain-China Educational Award (2013), and the Junior Research Fellowship at Kellogg College (2015-18). She serves as a Board Member of the International Sociological Association’s Research Committee on Labor Movements, Editor of Global Labour Journal, Contributing Editor of The Asia-Pacific Journal, and Editorial Board Member of the Springer book series of “Work, Organization and Employment.”