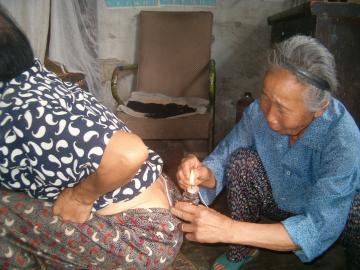 Healthcare provision in rural areas presents an ongoing challenge for the Chinese government. Despite the recent introduction of a cooperative healthcare scheme, many obstacles remain to the even and fair distribution of welfare. In this context, it is vital to understand how Chinese villagers themselves view health, illness and healthcare, how they explain illnesses and where they may seek help. Anna has carried out research on these topics for a decade, with funding from the Arts and Humanities Research Council (Doctoral studentship), the Leverhulme Trust (study abroad studentship), the British Inter-University China Centre phase 1 (supported by HEFCE, ESRC and AHRC), the Contemporary China Studies Programme (Oxford, supported by the Leverhulme Trust), the Universities’ China Committee in London, Davis Fund (Oxford) and Green College (Oxford). It has covered topics such as lay cancer aetiologies; home care for illness and attitudes to formal healthcare provision; how coexisting moral economies of subsistence and the market are articulated in everyday life; the interplay between eating practices, Bourdieusian taste and social status in rural China; and historically formed perceptions of fatness and health.

In February 2013, the Chinese government publicly acknowledged the existence of ‘cancer villages’ (clusters of high cancer incidence typically correlated with pollution), feeding a controversy that started in 2001 with the first appearance of the term.  But how do villagers experience and understand cancer in areas where there is no agreement on its cause? Who or what do they blame? How do they cope with its onset? Anna's monograph Fighting for Breath: Living Morally and Dying of Cancer in a Chinese Village is based on a total of 18 months of fieldwork in rural north-east Sichuan province starting in 2004. It is the first book-length ethnography to offer a bottom-up account of how families strive to make sense of cancer and care for sufferers in contemporary rural China. It explores lay perceptions of illness causality and everyday practices of care as prisms to understand how relationships with family members, locality and the state are reproduced or contested since the socio-economic reforms. Cancer is portrayed as an extreme embodiment of routinized and recurrent forms of social suffering and exclusion. Villagers’ “fight for breath” is both a physical and a social struggle to reclaim a moral life, to ensure family and neighbourly support and critique the state for its uneven welfare provision. Narratives about cancer causality and practices of care are embedded in a larger moral economy discourse on the part of Chinese villagers regarding both their social relations with their families and fellow villagers and their shifting relationship with the Chinese state. In contrast with many ethnographies of China which see the present as lacking in morality, this book highlights villagers’ incessant efforts to inhabit moral worlds and claims to act in a moral fashion, while redefining morality’s parameters.

Anna’s research on these topics has also resulted in two articles in the leading journals The Journal of Contemporary China (2010) and Social Anthropology (2009), which unpack the relationship between farmers' agency and the perceived connection between illness and water pollution in rural China. Her related work on Chinese farmers' socially, culturally and economically generated sense of lack entitlement to meat and milk (2007), and to hospital care (2010) engages with debates around the social reproduction of inequality.

Anna welcomes inquiries from potential doctoral candidates and post-doctoral researchers interested in collaborating on the evolving sphere of welfare provision in rural China and on villagers’ experiences and approaches to health and illness.