Living with pollution and citizen science in rural China

Living with pollution in rural China - Anna Lora-Wainwright and Colleagues 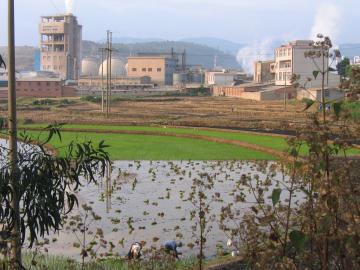 Environmental health is an urgent global issue. Building on her long-term work on experiences of illness, since 2007 Anna began to research the extent to which Chinese villagers regard pollution as a cause of illness and with what consequences. Citizen activism against pollution has attracted the attention of the media and the government alike. Although most environmental suffering takes place far from the purview of journalists, courts and NGOs, the daily grind of “living with pollution” has received scant attention. If we are to truly understand citizens’ potential for aiding environmental protection, more attention is required to grasp how they evaluate the costs and benefits of the development often coupled with pollution.  Anna’s work fills this gap and explores their hugely diverse everyday struggles (see special collection Dying for Development, 2013; Resigned Activism, 2017) through collaborative fieldwork in three polluted sites. Anna looks beyond high-profile cases of successful resistance and focuses on the much more common scenarios in which pollution victims suffer in silence, are unsuccessful at ending pollution, or are co-opted by polluting enterprises into seeing it as inevitable.

Studies of environmental consciousness have tended to focus on urban middle classes, giving the false impression that rural populations are either unaffected, do not know or do not care. Anna’s writing on this topic draws on three distinct collaborative projects with fieldsites in Yunnan (key project members: Yiyun Zhang, Benjamin Van Rooij, Wang Qiliang and Wu Yunmei), Hunan (key project members at the time of Anna’s participation: Jennifer Holdaway, Fang Jing, Li Yonghua, Lu Jixia, Ran Shenghong, Yang Linsheng, Wang Wuyi, and Zheng Rui) and Guangdong (Peter Wynn Kirby, Li Liping, and Yvan Schulz). It overturns this bias to show that rural Chinese do not accept pollution in their vicinity out of ignorance but often because of complex social and economic relationships with the polluting firms and out of desperation and inability to obtain redress. Her work illustrates how villagers experience environmental health risks, whether they accept them and why. In doing so, it presents a nuanced understanding of citizens’ agency, its motivations, its changing parameters and its limited effectiveness. It illuminates people’s deep ambivalence about development and modernisation and some of the new fault lines of inequality and social conflict which they generate. Against purely economistic analyses, Anna shows that the extent of resistance against pollution is not only an economic decision but also a deeply social and moral one. Describing a likely widespread scenario across much of industrialised rural China, this research provides a window onto the staggering human costs of development and the deeply uneven distribution of costs and benefits. It showcases the value of in-depth anthropological research within larger interdisciplinary and intervention-oriented projects. As a whole, it contributes to comparative environmental justice studies and complements their current Western and urban bias.

Anna welcomes inquiries from potential doctoral candidates and post-doctoral researchers interested in collaborating on various aspects of environmentalism in China.

• Lora-Wainwright, A. (2013) Dying for Development: pollution, illness and the limits of citizens' agency in China. The China Quarterly, 214(June): 243-393. Includes editor's introduction.

• QandA with Fred Pearce on my book Resigned Activism: Living with Pollution in Rural China, October 31, 2017. Republished in Chinese in the Financial Times

• How the rich escape the burden of pollution in China and the US, Chinadialogue, April 4, 2014.

• Chinese state and citizens must battle airpocalypse together, The Conversation, March 6, 2014, reposted in Chinadialogue.